Julian Onderdonk’s Blue Bonnet Field, Dusk, Twilight, Morning, and Landscape
2019
Ink on Paper
25 x 26 inches
After living in the State of Texas for about 16 years, I have finally made a piece that celebrates the state that I have fallen in love and can imagine not living here. I was also inspired by the fact that since Texas is so big, there are really many different states of Texas. When I moved to Dallas the culture is very much the west, whereas when I visit Austin a very different culture emerges. East Texas/ the Piney Woods is more a culture of the Southern states. It seems where ever you go in Texas there is a culture that counters this idea that outsiders might think of as a Texas culture. In fact, I had some preconceived ideas about Texas that I let drop quickly after a short visit. I suppose one could interpret a political message in this work too. Think about the redrawing of the congressional districts. Around Austin, it looks like a pinwheel. I am sure other interpretations are valued too.

Other than the state of Texas, I also used the shapes of the bluebonnet flowers as inspiration to some of the shapes that appear in the image. As always, I used words that are layered to make the image.
PREV / NEXT   8 / 9
BACK TO PRESENT - 2018 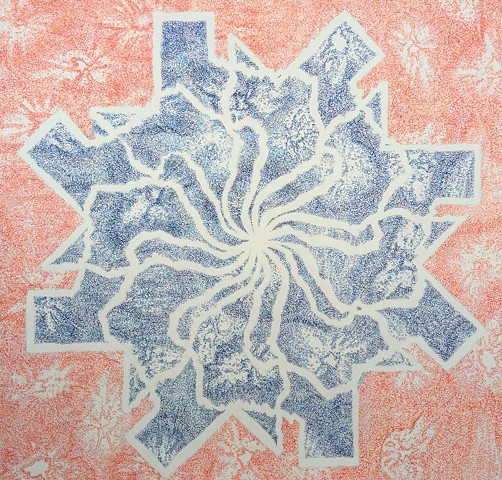